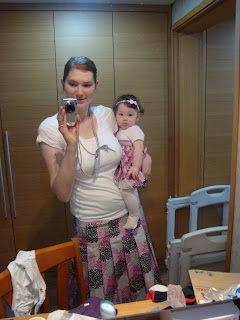 When Kimberly issued the skirt challenge, and showed us her beautiful gathered skirt, I was excited to make my own. For some reason, I thought I could do it without a pattern. I mean, skirts are easy, right? I really don't know what I was thinking. Despite a few little nitpicks here and there, I'm quite pleased with my final product. 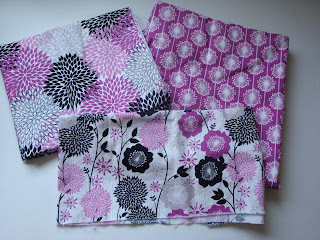 I went to my fabric stash and pulled out these coordinating fabrics from Riley Blake's collection. I had a purchased four yards of each at the Happy Quilt warehouse but didn't have anything planned for them. I thought the sunburst fabric would make a fun and colorful skirt. I started out by cutting two rectangles (from selvage to selvage) the length that I wanted for my skirt. I sewed the two pieces together and then sewed a hem. (I did it in black thread, but I wish I'd done it in white. I also should have done a blind hem.) At first, I tried to make a gathered skirt but I didn't like the way it looked. Kimberly suggested I try pleats instead. Never having worked with pleats, did a little internet research and played around with pleating on different scraps of fabric until I found the type of pleats I wanted (there are several types of pleats, who knew?). I then spent a bit of time playing around with my skirt, pinning and tucking until I found a pleat width I liked. I initially make my pleats much wider but I decided to space them about 3 inches apart, which I liked better. I ironed all my pleats in and then topstitched down the front of pleat about 8 inches to keep my pleats in place and to create shape to my skirt. I can't find the tutorial I used as my model, but this tutorial shows how I basically created my skirt.

After sewing my pleats in place, I sewed the two sides together and put in the zipper. I attempted to put in a lapped zipper, but when that failed, I went with the old center-seam standby. Not as refined, but it gets the job done. Next up was the waistband. I wanted to do a black piping to set the waistband off from the rest of the skirt. I love the effect it gives but I should have cut the black fabric on the bias so it would have moved and shaped itself better. Ruth also recommended using linen fabric as it was easy to work with and shape. Don't look too closely on my piping (especially around the curves). It's a mess. But from far away, the effect is quite nice. 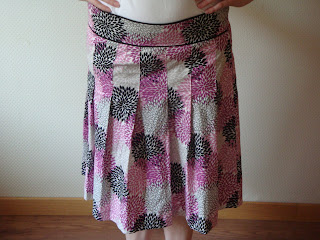 The other thing I didn't know about wide waistbands is that they should be cut on the curve so that they will be narrower at the top. That way, they conform to the waist better and offer a snugger fit. My skirt and waistband created a bit of a gap, so I sewed in three makeshift darts in my skirt to lessen the problem. 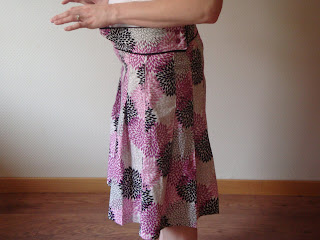 As you can see, there's still a lot of space in my waistband, but it's much better than it was before. I like my skirts to sit on my hip and not fit too tight. It's not quite as snug as I would have liked, but at least I don't think it's going to fall off me. The final touch was sewing buttonholes and buttons on the waistband tab. Again, here I learned that I should have sewed my buttons closer to the end of the tab. Now, there's a bit of waistband that sticks up.

After making my skirt, I had to make something for Zara as well. I used the coordinating fabric to make this quick onesie dress. It seriously only took me twenty minutes and I think it looks great. 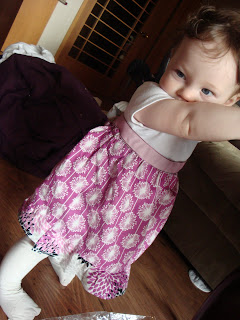 I may have to make some more.
Posted by Liz at 3:23 PM No comments:

I don't follow this particular blog much anymore, but was looking through their archives and noticed they are doing a "Mad Men Sew-Along" of a dress pattern similar to the sloper we are using. I'm only posting the beginning post, but there are others where she discusses making the darts and adjusting the pattern, such as this one where she talks about adjusting the skirt (which I'm in the process of doing right now).
Posted by Carolyn at 4:30 AM No comments:

Email ThisBlogThis!Share to TwitterShare to FacebookShare to Pinterest
Labels: Carolyn, The Dress

Skirts on the Internet 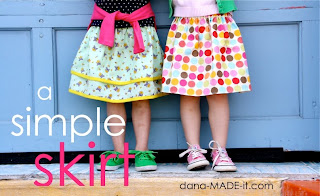 Hi, everyone. I made a skirt and wore it to church last Sunday, but we left that day for our vacation and I never took a picture. I promise to put it on tomorrow and have someone take a photo for me to share with you.
I know we've moved on to another dare, but one of my favorite bloggers, Dana, posted this cute skirt tutorial that is so simple and adorable. After I gave birth to Claire last May I made myself a bunch of skirts in basically the same way Dana shows--except mine were cut in a slight A-line. It was great for my post-pregnant belly that wouldn't fit into any of my old summer shorts or skirts. Actually, I still like elastic waistbands best because I feel like my shape is always changing. I'm also planning to make her circle skirt, which a different version of a skirt I made last summer as well.
This would be an easy skirt to add pockets to, so it could fit into our next challenge too, right?
Posted by Carolyn at 3:40 AM No comments:

I ended up making 2 skirts for this dare. I think I made the first one (which was very simple) just to see if I could make a skirt that I would actually wear. The only other skirt I've ever made for myself was in college, and I never wore it, ever. I used this pattern 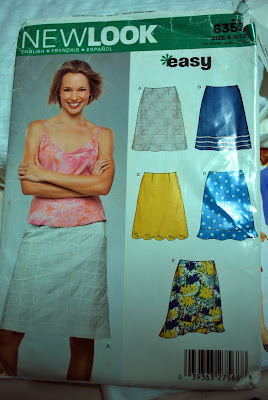 And I had some left-over material from skirts that my daughter Cora made last year for herself and her little sister. 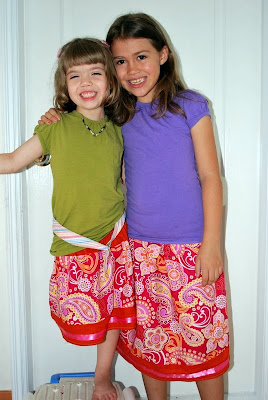 And I ended up with this. 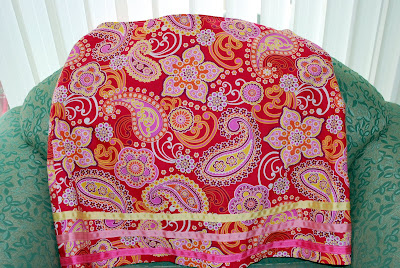 I made it slightly too big, and I made one mistake on the ribbon. 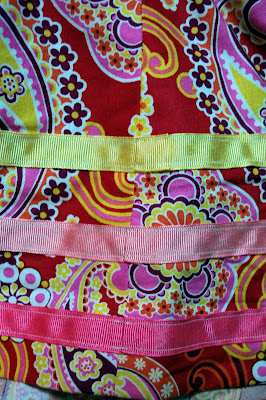 But overall I think it's fine for a skirt this summer.

With the next skirt I wanted to challenge myself a bit more, and I had some fabric that had actually inspired me (I'm pretty sure that made a big difference!). I used this pattern. 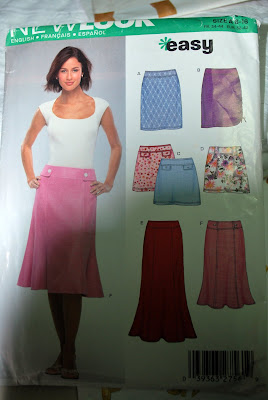 And here was my finished product. 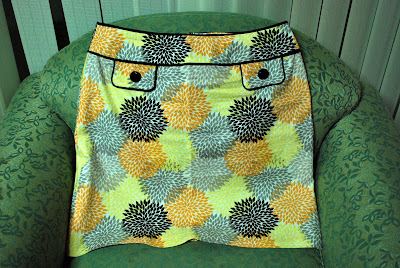 I am very, very happy with this skirt, but I did make a few mistakes. This was the first time I'd done piping, and it's a little uneven (thicker in some places, thinner in others). 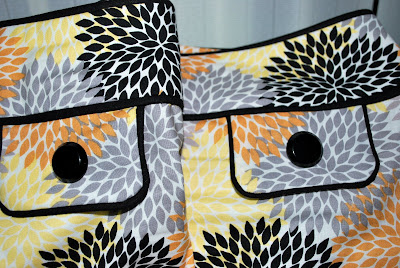 I also accidently made a tuck here, and was too lazy to fix it. 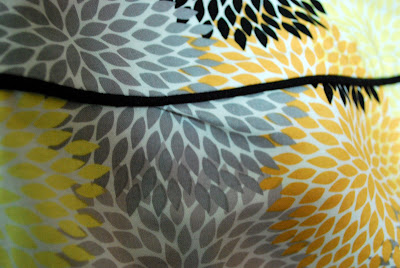 I'd like the skirt to be a little longer, so I'm going to try and replicate the yoke along the bottom of the skirt. I think that will add the perfect amount of length, and hopefully it won't ruin the overall effect. I learned how I can change the side seams just slightly to make the yoke fit better in front, and then this will be the perfect fitted skirt pattern for my body:) I wanted to make a fitted skirt out of this material because I wasn't sure if it would hang right as a fuller skirt. However, Liz made her skirt out of the same material (hers was a purple color scheme instead of yellow), and she made a fuller skirt with pleats - I LOVED it! I hope she posts a picture of it (hint, hint, wink, wink). So that was good for me to see how the same fabric can be used in different ways. We also learned from Kimberly about backing, and I think that would have made a big difference with this skirt as well. Next time:)

It sure was fun to see all the skirts that everyone made on Sunday, and this really was a motivating challenge. I even plan on making another skirt out of this lovely material that I found. 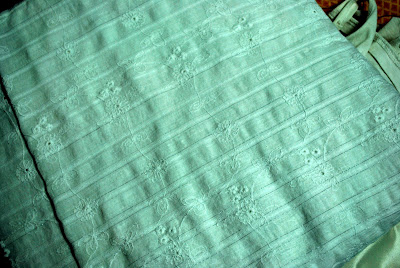 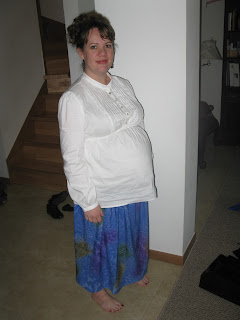 I completed the challenge this month!  I started experimenting with making a pair of (maternity) jeans into a skirt, but quickly lost interest in that - after spending an hour picking out the legs.  So I looked through my stash of fabric and found this piece that I had bought as a remnant some time ago, and used this tutorial to make the skirt.  It is much longer than the one in the tute because I put the waist below the baby bump (mountain?) and because I used polyester fabric that is 60" wide, instead of cotton that is only 45" wide.  I will be able to wear it around my waist when I'm no longer expecting, and can easily take more of the elastic in if need be.
Posted by Living Lavallee at 5:16 AM No comments:

After some discussion during the meeting, it was decided that we should all to some pockets.  So there you have it.  If you must, your pockets can be on a flat piece of fabric, but try to put it on something that can be used/worn.  After this month when everyone is feeling virtuous and accomplished because we got our skirts made, I have realized that having "something to show for yourself" is an excellent motivating principle.

Having said that, I am not sure what I will make with pockets this month.  (Especially since I wussed out and didn't put pockets on my skirt like I planned.  sigh!)  Happy pocketing, ladies.

This is the place to explore something new. Please join us in pushing your sewing skills to the next level. Each month we will have a theme to challenge you with...and then we will expect a report, regardless of the success (or lack there of) of your efforts. The idea is to share and grow, no shame allowed.


Those of us who can, meet the first Monday of the Month in Seoul. If you can't make it that far, well that is okay too. Participate with us online.

The Rules
click above to learn
how you can
participate